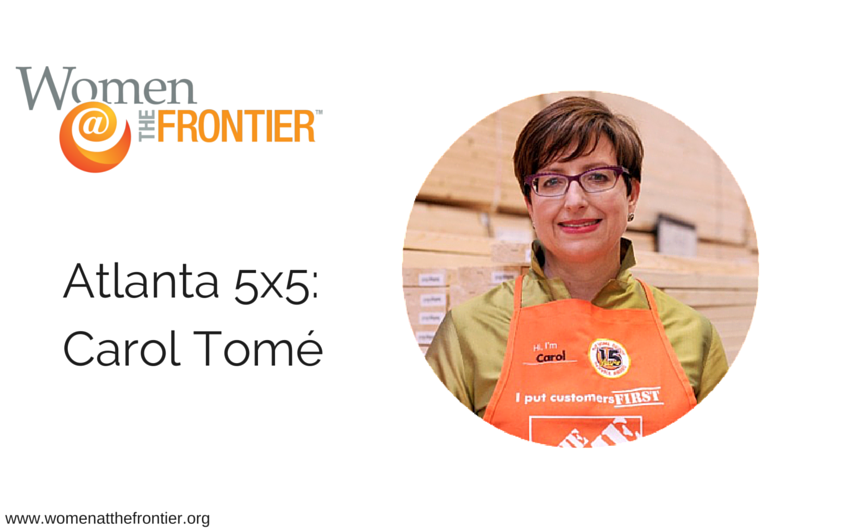 Women@TheFrontier and Invest Atlanta have joined forces with The City of Atlanta to create a unique blog series called the Atlanta 5X5. Together, we’re compiling our list of the top 5 women Role Models, influencers, and visionaries in the Atlanta area. From Deal Queen to Queen of Heart–find out how The Home Depot’s CFO has become one of the most admired power players in Atlanta.

It was the year the Georgia Dome opened its doors with a Falcons preseason victory over the Eagles. Gas cost an average of $1.05 a gallon and the Braves lost the World Series to the Toronto Blue Jays. 1992 was also the year new resident, Carol Tomé decided to stop at a home improvement store she had never heard of before: The Home Depot.

Some might call the encounter luck while others may say it was destiny. Regardless, Tomé noticed the building with its orange awning and pulled into the crowded parking lot. A recent transplant from Colorado, Tomé was curious about the warehouse-sized store. At the time, she worked as a closer in corporate finance—a deal queen. But in her free time, she enjoyed exploring her new city and shopping.

“I spent two hours walking around The Home Depot,” Tomé says. “I thought this place is cool. So, I called my husband and told him there’s this company, and I think we should buy stock.”

And that’s what the couple did.

Eventually, Tomé would go from customer and stockholder to CFO of this industry giant. As the second woman officer, she would serve under all four of the company’s CEOs and watch it grow from 400 to over 22,000 stores. Along with an impressive team, she would help drive the highest sales and profits in its history.

As an individual, Tomé would also reach mind-boggling achievements. She would be named the Chairman of the Atlanta Fed Board, make The Wall Street Journal’s list of Best CFOs in Corporate America, and be considered one of Fortune Magazines’ Top 50 Most Powerful Women in Business (twice!).

But today, when asked if she expects these accolades to become her legacy, Tomé replies with a resounding no. She hopes her legacy will be less about the deal and more about the individuals she impacts both inside and outside The Home Depot’s doors. “When I think of the legacy that’s always number one,” she says.

So, how did this power player go from Deal Queen to Queen of Heart? Here’s the story of Carol Tomé, a woman who discovered true success isn’t about the deal—it’s always about the people.

The Queen of Anything

From the beginning, Tomé’s parents said she could do and be anything, and she believed them.

It’s no surprise The Home Depot’s do-it-yourself culture appealed to this Wyoming native. Even as a child, her parents taught her the importance of making and doing. “I learned to hunt, fish, cook, and sew, and I lived off the land,” she says. Then, my parents would send me to Europe for the summer. I was really lucky…I had an unbelievable childhood.”

“I got a lot of recognition and awards for my work. But then I realized it really isn’t about the deal. And it isn’t about me. It’s about everybody else.”

Tomé followed her projected course until she hit a roadblock in her last year of graduate school at the University of Denver. That’s when her father broke the news that her parents were divorcing after 27 years of marriage. Also, he had decided to sell his bank.

Tomé says the news came as a shock. Eventually, she decided she wouldn’t let the setback derail from her dreams. Instead, she met the challenge head on. “I’m like all right, if I’m going to be a banker, I’ll be a banker,” she says. “I took one interview with the largest bank in Colorado and got hired.”

Tomé admits early in her career she defined success by the deal. As a major player in the corporate finance world, she acquired companies or raised finances by any means necessary. “I got a lot of recognition and awards for my work,” she says. “But then I realized it really isn’t about the deal. And it isn’t about me. It’s about everybody else.”

“She didn’t quit the company; she quit me. That’s not what I’m about. It changed me, and I vowed on that day I would never have anyone quit me again.”

A transition to team player didn’t come easy for Tomé. In fact, it took failure to uncover her path. Tomé says she was busy working on a sizable acquisition in New York, but it was performance review time back at her Colorado office. She had to give a particularly tough evaluation to an employee and didn’t want to do it. Tomé decided to hold the meeting over the phone. “And do you know what happened?” Tomé asks. “She quit. Do you blame her? I was a terrible boss.”

After some self-analysis of the situation, Tomé discovered a hard reality. “She didn’t quit the company,” she says, “she quit me. That’s not what I’m about. It changed me, and I vowed on that day I would never have anyone quit me again.”

Not long afterward, Tomé received a call that The Home Depot was looking to fill a position and wanted to speak with her. She interviewed with the company but initially hesitated to join the team. It was a conversation with legendary founder and retail icon, Arthur Blank that convinced her to take the final plunge from deal queen to the retail queen.

And as they say, the rest is history.

By 2001, Tomé was named CFO and established her role as a pivotal member in the company’s success. When asked about her strengths and how she achieved this success, Tomé says it’s about passion. “I love this company, the customers, the associates…and communities we serve. I’m passionate about it. Passion can be infectious.”

The Queen of Heart

While passion allowed Tomé to break glass ceilings, it also pushed her to work grueling hours. “I was working really hard in the early days,” she says, “every single day.” Then, one morning Tomé woke up and looked into the mirror. She asked herself one simple question: what will my tombstone read? “I realized it’s going to read, she worked hard. I thought, no, no, no this cannot be the purpose of my life. This cannot be the legacy I leave behind.”

Dismayed, Tomé asked another question. “I asked myself, what do you want your tombstone to read. At that point, I realized I wanted it to read, she made a difference in my life. And it changed me…I set myself on that course to make a difference, and I’m not done.”

A decade later, Tomé continues to follow her heart and work to impact the lives of others.

Today, this CFO serves as a Trustee for the Boys and Girls Clubs of Metro Atlanta, Kennesaw State University Foundation, and Georgia Tech President’s Advisory Board. She is a member of the Board of Governors for the American Red Cross and Secretary to the Board of Trustees for the Atlanta Botanical Garden. “I have an amazing team,” she says, “and they lift me up so I can do other things. I give a lot of credit to them.”

“You’ve got some women in powerful positions. If you think of Hale Moddelmog heading up the Metro Atlanta Chamber, she’s really driving change there. Or Virginia Hepner, head of the Woodruff Arts Center—in old Atlanta, that would have never happened.”

One of the newest boards Tomé serves is the Women’s Entrepreneurship Initiative (WEI), a business incubator for women entrepreneurs launched in partnership by the City of Atlanta and Invest Atlanta.

When asked about the role of women in Atlanta, Tomé acknowledges the city is making progress. “You’ve got some women in powerful positions,” she says. “If you think of Hale Moddelmog heading up the Metro Atlanta Chamber, she’s really driving change there. Or Virginia Hepner, head of the Woodruff Arts Center—in old Atlanta, that would have never happened.”

Tomé sees the same changes occurring in business and entrepreneurship.“My friends are leaving the corporate world to start their own businesses,” she says. You see this trend emerging, which is really cool.”

What’s not cool? The lack of women in politics—Tomé hopes to see more diversity in the political arena. However, she is optimistic it will happen soon.

Before our interview is over, we ask Tomé one final question: how did you survive? Tomé shakes her head and admits she doesn’t know. Then she adds, “But this is what I did know then and now: it didn’t matter if I didn’t survive. I would be okay. People get weirded out by the fear of failure. Make sure you have tools in your tool kit so you can survive, but don’t worry about it.”

So, how did this power player go from Deal Queen to Queen of Heart? She discovered that true success is always about the people.