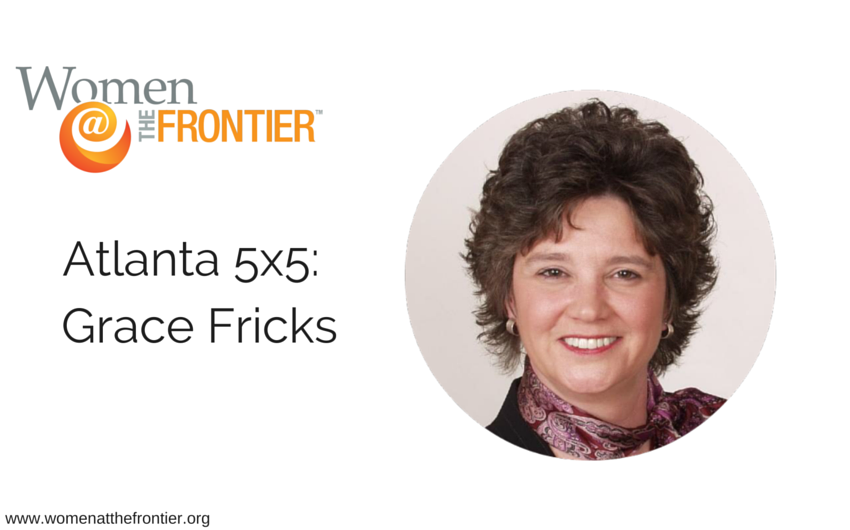 Women@TheFrontier and Invest Atlanta have joined forces with The City of Atlanta to create a unique blog series called the Atlanta 5X5. Together, we’re compiling our list of the top 5 women Role Models, influencers, and visionaries in the Atlanta area. Today’s post celebrates Grace Fricks, a southern-born visionary challenging the status quo and leading small business owners toward financial success.

Grace Fricks proves the power of Role Models in our everyday lives.

As a kid in Canton, Mississippi, Fricks admired her grandmother—a woman described as a cross between the legendary Joan Crawford and actress Agnes Moorehead (Endora from the television series Bewitched). While other grandmothers cooked dinner and rocked on their front porches, hers visited from Memphis, Tennessee boasting glamorous hats and high fashion. Not to mention, she greeted a young Fricks with a box of crème puffs tied in a bow.

But Fricks’ real-life Role Model possessed more than an appreciation for haute couture and pastries.

“When I think about her, she was strong,” Fricks says. “She was a civic and social leader. She founded charity balls and was the president of a variety of women’s clubs. She hosted women’s groups in people’s homes to talk about the election of John Kennedy. I thought I wanted to be like her.”

And in some ways Fricks’ story mirrors her grandmother’s life.

Like her childhood hero, Fricks lends her voice and experience to those in need. First, in her career as a social worker and now in her encore career as Founder and CEO of Access to Capital for Entrepreneurs, Inc. (ACE), a not-for-profit lending organization that provides microcredit and small business loans for underserved markets. Fricks explains, “I believe everyone who has that drive and desire—that intangible thing—deserves the opportunity to succeed…”

Named one of the 100 Most Influential Georgians by Georgia Trend Magazine, and the SBA Georgia District Financial Services Champion of the Year, Fricks spends her days as a fierce Role Model and a proponent for women entrepreneurs around the south. So, how did this visionary leverage her second career to become one of Atlanta’s top influencers? Here’s what Fricks had to say to Women@TheFrontier about taking first steps, living with grace under fire, and focusing on the future.

Here’s the thing about Fricks: if you ask her about her personal life she grows quiet. She would rather discuss (with her thick southern drawl and infectious laugh) the success of her clients or the in-and-outs of business. “I’ve never been afraid to ask for someone else,” she says, “for something outside of myself, which is a typical woman thing.”

However, Fricks’ continues to prove she is anything but typical.

With a bachelor’s degree from the University of Tennessee at Martin and an MBA from the University of Memphis, Fricks’ early career focused on social work. In 1991, she served as President and CEO of The Appalachian Consulting Group (ACG), an organization improving the physical and mental health of individuals with mental illnesses. “I still have the consulting company,” Fricks says, “and my husband, Larry does the work.”

Since its inception, ACG has served to train more than 5,000 peer specialists in 25 states and helped countless people self-manage mental illness. After excelling for two decades in health and social services, Fricks was awarded the Advocate of the Year from the Georgia Governor’s Council on Developmental Disabilities.

But by 1997, Fricks had a new idea. “I had an interest in this intersection of social mobility and money,” she says. “Money is the universal leveler. If you’ve got money, you can make things happen.” This idea–the merger between social work and finance–became the first step toward building ACE, a vehicle for loans for an underserved market of entrepreneurs.

A friend who ran the entrepreneurial education program at North Georgia Technical College sparked the idea for ACE. “Here’s this small technical college working on entrepreneurship way before it became trendy,” Fricks says. Through her connection with the college, she learned many of the graduates possessed the education and dedication to start a business but lacked the finances to succeed. “So, the Appalachian Regional Commission gave us a $50,000 grant for the loan and around $40,000 over two years to pay for setting it up,” she says. “I thought what kind of trouble can I get into with $50,000.”

As Fricks soon discovered, that loan amounted to more than she or anyone else could imagine.

Living with Grace Under Fire

If Fricks’ first step involved creating ACE, her second one required her to learn about finance and loans.

A social worker, Fricks knew little about starting a loan business. “Being in rural areas, I was able to garner support from the community,” Fricks says. “I went to my personal community banker and told him I want to do this…he set up an Excel spreadsheet and made coupon books.” Fricks also contracted a local entrepreneur to help with PR and worked with the technical college to organize the loan committee. “It was a collaborative effort,” she says, “and I was just pulling the players together.”

This ability—pulling the players together–would become Fricks’ superpower as an entrepreneur.

What started in four counties in North Georgia grew to include over $31 million in loans issued and generated over 4,000 jobs in Georgia. ACE received various awards including the 2010 OFN Wells Fargo NEXT Award for innovation, acceptance into the Goldman Sachs 10,000 Small Businesses CDFI Growth Collaborative, and acknowledgment by CNN Money as one of the country’s top 10 microfinance organizations.

“You reach deep down, and whatever you’re made of,
diversity pulls that out.”

With success, came some setbacks. For Fricks, they arrived with the 2008 recession. “We knew early on it wasn’t just occasionally someone couldn’t pay. By December 2007, it was systemic. We hit 20% default rate. And businesses couldn’t fabricate customers. Their choices were to pay ACE, home mortgages or health care for their families. That year and the following year were extremely tough for us.”

Fricks realized she couldn’t give up on ACE’s mission, though.

She refused to hunker down. Instead, she used her superpower to pull the proper players together. They developed a sustainable, yet aggressive plan for the company. “You reach deep down, and whatever you’re made of, diversity pulls that out,” Fricks says.

And that’s what ACE did. They leveraged capital and borrowed money. They diversified with the addition of Georgia Green Loans, which focused on loans for businesses developing sustainable practices and energy efficiency.

In the end, while other traditional banks across the nations closed their doors, ACE threw theirs open and thrived.

“We grew almost 400% over the next three years,” Fricks says. “We hired former bankers, many who had lost their jobs due to the recession, and they helped with underwriting and we expanded into Atlanta. It changed the course of history for us.”

When asked about the future of Atlanta, Fricks responds with enthusiasm. She believes the city will experience continued growth, especially if leaders stay focused on small businesses.

“One of the particular things in our industry is neighborhood economics,” Fricks says. “What is attractive to everyone is a walkable neighborhood. Pizza parlors, coffee shops, and services all make a community a place you want to be. If we leave that behind in favor of Amazon drones or moving diversity out of the neighborhood, people will not want to be here.”

“My purpose is to empower others to fulfill their dreams. That’s what I’m good at, and that is what excites me.”

Like her grandmother, Fricks also dedicates her time to multiple boards and civic initiatives, including the Center for Rural Entrepreneurship, Appalachian Community Capital, and Atlanta Emerging Markets, Inc. (AEMI). But the most recent board she serves on is the Women Entrepreneurship Initiative (WEI), a business incubator for women entrepreneurs launched in partnership by the City of Atlanta and Invest Atlanta.

Women in entrepreneurship is a particular area of interest for Fricks, one she and ACE support. In 2013, the company began implementing the Women Investing in Successful Entrepreneurs (WISE) program through the Clinton Global Initiative America (CGI America). The loan program provides access to capital, business education, and advisory services focused on women starting or expanding businesses in Georgia. The numbers reflect Fricks’ commitment to the program. ACE has secured 70 loans totaling more than $4.4 million to 73 women entrepreneurs, many of them with low-to-moderate incomes and minorities.

Finally, we ask her the hard question: what’s next for the future of Grace?

Fricks becomes still and ponders the question for a moment. “My purpose is to empower others to fulfill their dreams,” she says, smiling. “That’s what I’m good at, and that is what excites me.”

…An answer that would make any grandma proud.