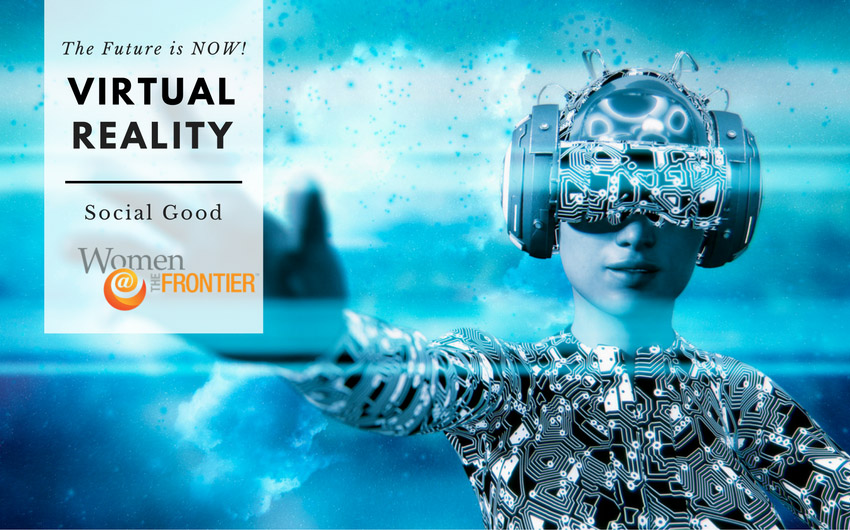 The Future is Now!
VR for Social Good

Virtual reality is one of the most exciting, exponentially-growing industries. Find out how women are using storytelling and VR to transform the way we interact with our world.

Welcome to the Future!

Today, virtual reality (VR) is one of the most exciting, exponentially-growing industries. Major players in the field, including Facebook and Microsoft compete to provide users with thrilling virtual experiences. And funding has never been more positive. According to a report by Digi-Capital, Venture capitalists invested $1.2 billion into virtual-reality and augmented-reality startups in the first quarter of 2016 alone. As both hardware and software improve, the emerging industry is predicted to disrupt entertainment, education, and even sports. Yet, it’s one of the most sought-after applications by non-profits who see its potential to promote social good.

The power of VR really lies in its ability to revolutionize how we tell stories. The past few years we’ve seen an outpouring of companies, like Allspice VR, LectureVR, and ZSpace, revolutionize education. Immersive VR education is an impactful way to engage students and bring in the awe factor in learning. It allows to students to travel to the ends of the Milky Way, visit global heritage sites, and engage with historical figures— all within the walls of the classroom.

Beyond education, many non-profits are leveraging this tool. Since social campaigning is all about shifting mindsets and inspiring action, VR could be the ultimate catalyst to harness this change. For instance, last year RYOT, a Los Angeles-based company, released a 360 video documenting the post effect of the 7.8 degree magnitude earthquake in Nepal. They hoped to convey to audiences the catastrophic impact of the earthquake and drive viewers to make more donations. Something RYOT’s cofounder, Bryan Mooser, calls the “ultimate fund-raising tool.”

“The power of VR lies in its ability to provide users with an immersive experience.”

As simulations like this one demonstrate, the power of VR lies in its ability to provide users with an immersive experience—one that in this instance, would have been too dangerous or impractical to achieve without the technology. Clouds Over Sidra, another profound VR film released in January 2015, allows users and potential donors to briefly live the life of a young girl as she explores a refugee camp. The campaign helped UNICEF to raise $3.8 billion, nearly twice what was projected.

This Summer, Facebook’s Oculus, one of the main game-changers in the field, announced an initiative called “VR for Good.” It includes the 360 Filmmakers Challenge, which partners high school students with filmmakers in the Bay area. A second program, 360 Bootcamp for Nonprofits, teams up 10 rising filmmakers with 10 nonprofits.  According to the team, filmmakers “are pushing the boundaries of cinematic VR to tell stories with an impact.”

Though VR remains a male-dominated industry, pioneering women continue to conquer the forefront. To promote this influx, initiatives such as Digital Media Academy’s ‘Made by Girls’ aims to introduce girls to STEM. ‘Girls and Gigabytes,’ an event launched by the White House, brought together African American girls and spread awareness about accessible opportunities for girls in STEM.

Thanks to these efforts, VR has the potential to take storytelling to the next level and drive social change.  “Virtual reality is definitely still a guy’s world,” Nonny De la Peña says. “I’m doing my best to bring women in and encourage women.” A powerful message we hope to see more of in the future.

Do you know any women Role Models in VR? If so, tell us about them through the comments section or on social media. We want to connect with you.