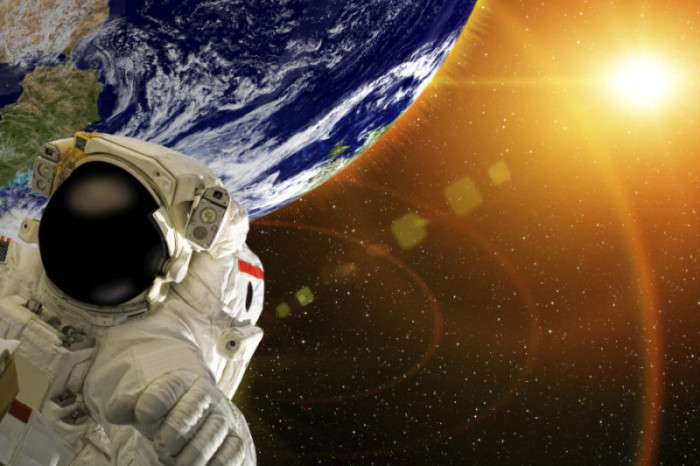 Three Lessons to “Jemison” your Life!

“Sometimes people have already decided who you are without your story shining through.”
– Dr. Mae Jemison

Yes, I just made a verb out of Dr. Mae Jemison’s name. The first time we heard Dr. Jemison speak, we thought she felt more verbish than nounish. She exploded with confidence and self-assuredness; she inspired us to transform, evolve, shift and become more— a verb. Listening to her story, we realized if her childhood reminds us we’re never too young to command the stars, her adult life announces we’re never too ‘experienced’ to fly.

After Women@TheFrontier’s interview with Dr. Jemison, we knew we had to share more about this woman of action. So, here are a few introspective lessons Women@TheFrontier learned during our Female Game-Changer interview with Dr. Jemison, the first woman of color to travel through space. We like to call this one “Three Lessons to ‘Jemison’ Your Life!”

To “Jemison” our lives, we have to remember that success resides somewhere amid feeling, thinking, and doing. It means listening to our head and heart despite the skeptics, self-doubt, and obstacles in our way. It’s about thinking big and working harder.

Dr. Jemsion embodied this lesson early in life when she dreamed of going to space. Born the youngest of three kids, she was raised by her mother, a teacher, and her father, a construction worker who also drove a cab.

“My dad taught me how to count and play cards at the age of six,” Jemison says, “but he was also the type of father who took the time to comb my hair in the morning before school.”

When asked about her confidence and inner-drive as a child, she responds with decisiveness and humility, “I think it comes from choosing your parents well! I think parents have an incredible impact on their kids.” Later, she explains how her parents encouraged political conversation, which included discussions about women and space. “They didn’t always agree with me,” she says. “The difference was I was allowed to have those conversations. I was allowed to argue my case.”

Dr. Jemison’s intellect and drive were evident when she graduated high school at 16 and attended Stanford University, majoring in chemical engineering and African-American studies. After receiving dual degrees, she enrolled at Cornell University Medical College to become a biomedical engineer.“I didn’t know much about Cornell,” Jemison says. “I went to Cornell because I wanted to live in New York!” She becomes pragmatic when asked how attendance at renowned schools like Stanford, Cornell and Dartmouth (where she was a professor until 2002) made a difference. “I know people who have done wonderful things but didn’t attend Ivy League schools,” she says. “[For me,] going to Stanford was important, going to Cornell was important. It’s the people you’re exposed to that help you gain perspective.”

Yes, Lesson 1 encompasses a fundamental element for success: we can choose to sit on the sidelines, a casual observer of the game of life or we can jump in with both feet and courageously fly.

“Pay attention to the world around you and then find the places where you think you’re skilled. Follow your bliss—and bliss doesn’t mean it’s easy!”

Lesson 2: Discover Your Authentic Self and Stick to It

Dr. Jemison’s life validates the idea of listening to your inner GPS—that voice leading to your authentic self. As a child, part of her self-discovery centered on Role Models like Julius Nyerere, the first President of Tanzania, and Linus Pauling, a biochemist and peace activist, awarded two Nobel Peace Prizes. These heroes fueled her intellect and fostered an early understanding of social responsibility.

While these Role Models inspired Jemison to become a thinker, her favorite TV shows, Star Trek and Honey West, fueled her imagination and drive. On Star Trek, she admired Lieutenant Uhura (who she was often compared to as an adult), but also idolized the logical genius, Mister Spock. A lesser known hero for her was the main character of the show Honey West, a 1960’s crime drama featuring the first female detective to appear in a TV series. She appreciated Honey West’s audacious personality which somewhat mirrored her own. 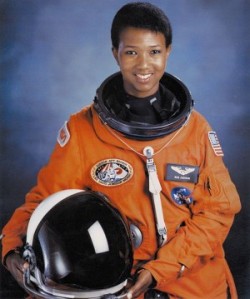 As an adult, Dr. Jemison continued following her own path when she submitted her application to NASA following Sally Ride’s historic flight into space in 1983.

Due to the loss of the Challenger in 1986, Jemison’s aspirations were momentarily delayed. When the program reopened four years later, she became 1 of 15 candidates from a field of 2,000 people accepted. She spent eight days in space on the Endeavour, investigating the effects of weightlessness on the physical body.

“Pay attention to the world around you and then find the places where you think you’re skilled. Follow your bliss—and bliss doesn’t mean it’s easy!”

A pioneer and celebrated female astronaut at NASA, Dr. Jemison could have chosen to ‘enjoy the ride,’ but instead decided to keep moving forward in a less linear route. She realized there were other frontiers to explore—this time in the world of entrepreneurship.

Believing in the revolutionary power of science and technology, Dr. Jemsion leveraged both, along with a newfound focus on human behavior, to create Jemison Group, Inc, BioSentient Corp, and the Dorothy Jemison Foundation for Excellence. Her latest venture, 100 Year Starship (100YSS), launched in 2012 with the mission to make interstellar space travel a reality in the next 100 years.

“Everything I’ve done has put me in the position to do this,” she says. “It was a place where I could make a unique contribution.” According to Jemison, 100YSS’s appeal is that “it’s not just about remote sensing. It’s about cultural behavior, how we see ourselves and our relationship together.” When asked about its effect on the future, Dr. Jemison explains, “I think people need an adrenaline rush, and we get it from really foolish places right now. I think there’s a lack of foresight at how we’re looking to the future…[I feel like] maybe it’s time for me to push out more on this.”

Dr. Jemison proves that Lesson 2 is about listening to your voice, evaluating your options, and gathering the courage necessary to become a woman of action.

Dr. Jemison’s story is incredibly real and inspiring. Perhaps it is so inspiring because of its realness and relatability. And the best part, it’s not about perfection, but perspective!

It’s this relatable perspective that persuades us to listen when Dr. Jemison gives advice on making a difference in the world. “Ask yourself, what kind of things jive with your personality,” she says. “Pay attention to the world around you and then find the places where you think you’re skilled.” She adds, “Follow your bliss—and bliss doesn’t mean it’s easy!” 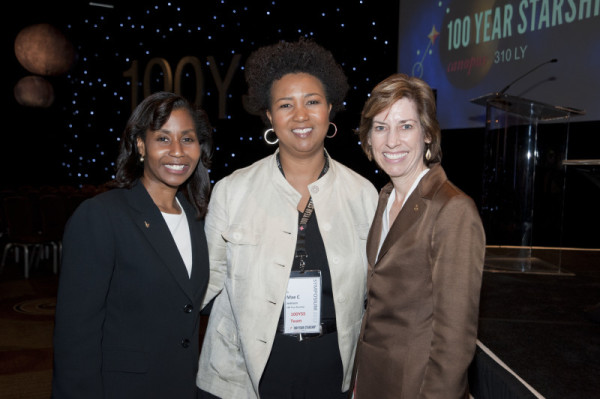 Today, Dr. Jemison continues to follow her own advice and bliss. She is refreshingly opinionated in her fierce advocacy for girls in STEM, but not to the exclusion of boys. She is also an outspoken proponent of innovation. “People use the word ‘innovate’ and assume that it means good,” she says, “but it just means something new. I hope we realize that we get a choice in what technology we design, develop, and use.”

She is also passionate about the future and the role of women. “Human behavior is intimately interwoven into everything we do,” she says. “If we don’t bring the full range of experiences to the table, we’re going to miss something. And then we won’t have the best chance for beneficial success.”

Finding your joy is essential in becoming the best version of yourself, but it’s nothing without humor. If you ask us our favorite “Jemison” advice about success and becoming a woman of action, the answer is easy: it’s the moment her voice becomes playful. “Have a sense of humor,” she says. “You’re going to mess up from time to time. Laugh at yourself; it’s not that deep. And if you fall, then make a big splash!”

So…here’s to making big splashes no matter who you are!

Be brave. Be bold. We would love to hear from you! What lesson did you learn from Dr. Mae Jemison? Share it with us on our Facebook page, comments section, or Twitter