Here’s the thing about water: like Samuel Taylor Coleridge said in The Rime of the Ancient Mariner, it’s everywhere. Water makes up 71% of the Earth’s surface and approximately 60% of the human body. It’s so abundant that at times, we forget we owe our existence to those tiny droplets of molecules.

Why are we talking about water? It turns out, H2O isn’t the only element that transforms and rises under intense pressure—people do too.

In our last post, we talked with Jacqueline Jones Royster, the first African-American Dean of the Georgia Institute of Technology. During her interview, we learned how this pioneer and Role Model leverages her talents as a “writer, reader, and talker” to rise above the   of women in academia. A leader in her field, she holds the Ivan Allen Jr. Dean’s Chair in Liberal Arts and Technology, and is professor of English in the School of Literature, Media, and Communication. 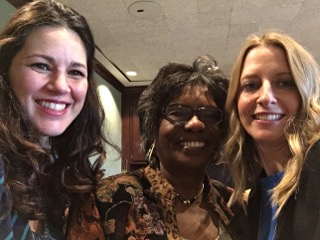 A quick selfie with Dean Royster

What else did we uncover about Royster? She’s like water.  She changes. She flows. She reaches her boiling point and transforms. She rises again and again when placed under intense pressure, but how?

Step 1: Uncover Your Solid Values
“My mother was a force to be reckoned with, and my father was a hard worker. He didn’t finish high school. He was very smart, but he grew up in a context that didn’t support his receiving education. As a truck driver, he was an entrepreneur. He was one of five brothers, and three of them were loggers. One of the things I found interesting about coming to Georgia Tech is they have they have the Institute of Paper Science and Technology (now the Renewable Bioproducts Institute). I always smile when I go there because my family was part of that process.

Essentially, I came from two families who did not have ego problems. They were confident in their ability to work hard and do what was necessary. They grew up in an era when there were severe limitations on what that meant. They did what they had to do to take care of themselves and their family.”

Step 2: Go With Your Flow
“My bookshelf is about my work. So, there’s no mystery about what’s on my bookshelf! It’s related to the lives, conditions, and circumstances of women of African descent. My work is interdisciplinary. I connect rhetorical studies, women’s studies, and African (and African Diaspora) studies. These analytical lenses converge to help us understand and interpret particular sets of experiences within the context of the human enterprise writ large. 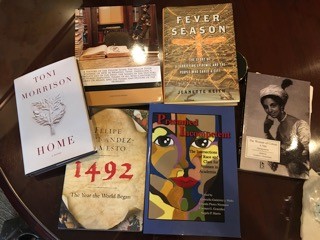 Right now, I’m reading Fever Season for a project I’m working on that posits devastating disease as an interesting vector in socio-political activism project. I like history (I don’t play a historian on TV), but I use it to help me think about things. I read Toni Morison’s Home on a plane recently. She is among the African-American women writers whom I admire and study. I am also reading Presumed Incompetent, a book about race and gender in the academic world. My interests in the intersections of race and gender in the academic arena are longstanding.

Step 3: Reach Your Boiling Point and Keep Rising
“I have felt particularly charged by who I am and what I care about. To bring light to the stories of African-American women—to their lives, their condition, their context—but also to their accomplishments. So much of what I’ve published has been about bringing those stories to light. And I’ve said more than once, if people had known about, listened to, and taken to heart some of the things nineteenth-century African-American women were saying back then, we wouldn’t be in the mess we are today. They were thinking very well about a lot of things. How can you ignore such good intellectual engagement with some of the thorniest issues of their day? Their insights resonate still. I’ve said about Traces of a Stream that it was my “heart” book. I fell in love with the passion of those women who were bound and determined to do what they did with their lives. How could I not tell those stories? ”

We hope you’ve learned something new about Jacqueline Jones Royster. Let us know your thoughts. What else do you want to know about this pioneer and Atlanta Role Model?