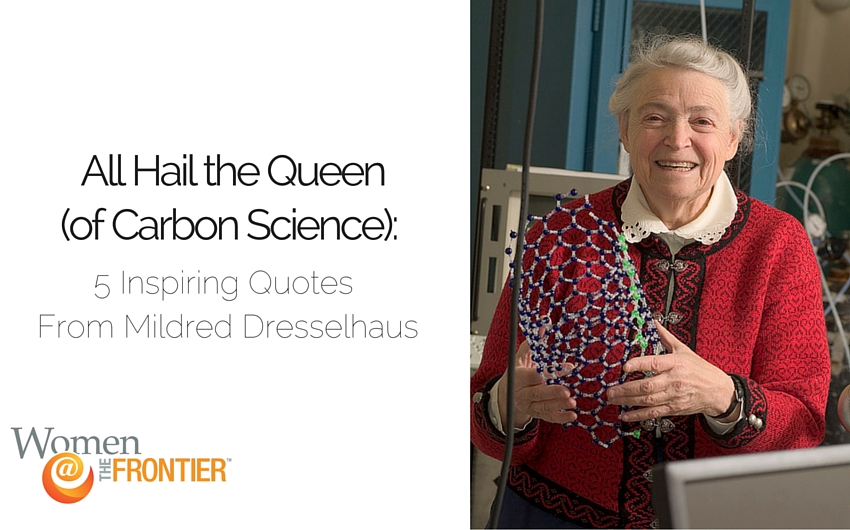 All Hail the Queen
(Of Carbon Science):
5 Inspiring Quotes From
Mildred Dresselhaus

A pioneer, Mildred Dresselhaus dedicated more than 50 years to her work as a professor of physics and engineering at MIT. Find out how this Role Model continues to inspire others through her work in carbon science.

Once upon a time, in a faraway land, there was a queen—of carbon science…

In a previous post on Women in Nanotech, we talked about how Mildred Dresselhaus earned her royal title the hard way, through groundbreaking work in physics and engineering. But that was just the beginning of her story. With an interest in the electronic structure of semi-metals, especially graphite, Dresselhaus has dedicated more than 50 years to her work as a professor at MIT. She’s blazed a path for the future of carbon computing and often without the acknowledgment from her peers.

While her success was quiet, in recent years she’s garnered much-deserved praise including the National Medal of Science, the Oersted Medal, Presidential Medal of Freedom, the Enrico Fermi Award, and the Kavli Prize. In 2015, she became the first female to receive the IEEE Medal of Honor.

But that’s not where her reign ends.

Dresselhaus is an 85-year-old mother, grandmother, and mentor who graduated over 60 Ph.D. students and holds 28 honorary doctorates worldwide. And still, each morning she heads to her office at MIT ready to delve into her research and mentor students.

All hail the queen!

Last month, I had the opportunity to hear Dr. Dresselhaus speak at The Solid-State Sensors, Actuators, and Microsystems Workshop in Hilton Head Island. She spoke with enthusiasm about her drive for diversity and commitment to research.

So many lessons, so little time…

In honor of the queen (of carbon science), we decided to share some of those lessons— with the help other ‘royals.’  Here are 5 thought-provoking quotes from Mildred Dresselhaus:

While Dresselhaus holds 28 honorary degrees today, it wasn’t always the case. The daughter of Eastern European immigrant parents, she grew up in a low-income area of New York City during a time when women weren’t encouraged to enter science fields. Eventually, she found her way to Hunter College where she took classes to become a teacher.

While at Hunter College, Dresselhaus met her mentor and Role Model Rosalyn Yalow, a medical physicist, and a co-winner of the 1977 Nobel Prize in Physiology or Medicine. Dresselhaus eventually landed at the University of Chicago where she took a quantum mechanics class from physics giant, Enrico Fermi. She credits him for teaching her to think like a scientist even if she ‘was an unlikely person to be there.’

2. “I wanted to find something unpopular in case I had to miss a day or two for my children.”

After receiving a Ph.D. from Univeristy of Chicago, Dresselhaus and her husband headed to Cornell where he joined the faculty, and she worked on her postdoc. In 1959, the Dresselhauses had their first child and three more would eventually follow suit. They remained at Cornell until 1960 until both found jobs at MIT’s Lincoln Laboratory. There, Millie (as her friends call her) switched her focus from superconductors to semi-metals, mostly because the field was unpopular at the time and she’d be able to miss work occasionally when her kids needed her. A decision that influenced the course of her career.

3. “In the beginning, the encouragement came from women…”

Dresselhaus says her first financial support came from women. It all began with philanthropist Abby Rockefeller Mauzé and her fund to help female professors in underrepresented fields. In 1967, Dresselhaus served as the Abby Rockefeller Mauzé visiting professor at MIT. This support led to a permanent position as a full professor of Electrical Engineering. She added a joint appointment in physics almost twenty years later.

4. “People said you’re crazy…But if you think you’re right, stick to it. And we were right.”

As a pioneer in nanoscience, Dresselhaus is no stranger to controversy. In 1990, she and Richard Smalley (winner of the Nobel Prize in chemistry) spoke at a Department of Defense workshop on carbon materials. During the Q&A portion, an attendee asked about the connection between a fullerene and a carbon fiber. This question led to a discussion on the single wall carbon nanotube.

The topic continued to interest Dresselhaus and in 1992, she published a paper with colleagues on the possibility of semiconducting or metallic carbon nanotubes. However, many peers didn’t accept the paper’s results until almost six years later.

It didn’t matter, though. Dresselhaus believed she was right and stuck to it.

5. “The best thing about me is the inspiration to keep working. We have time to do many things the young faculty can’t do and we love it.”

If we can learn anything from Dresselhaus, it’s that age and gender don’t define us. Instead, they lend a different and much-needed perspective to the world.

Dresselhaus says, “Women and men do the same physics, but with different societal constraints.” She proves this idea also holds true as we age too. “Individuals contributing can span all lifetimes,” she says. “It’s good to keep working.”

We hope you learned something new about this Role Model. Let us know which quote inspires you.

All GIF’s found at Gyphy