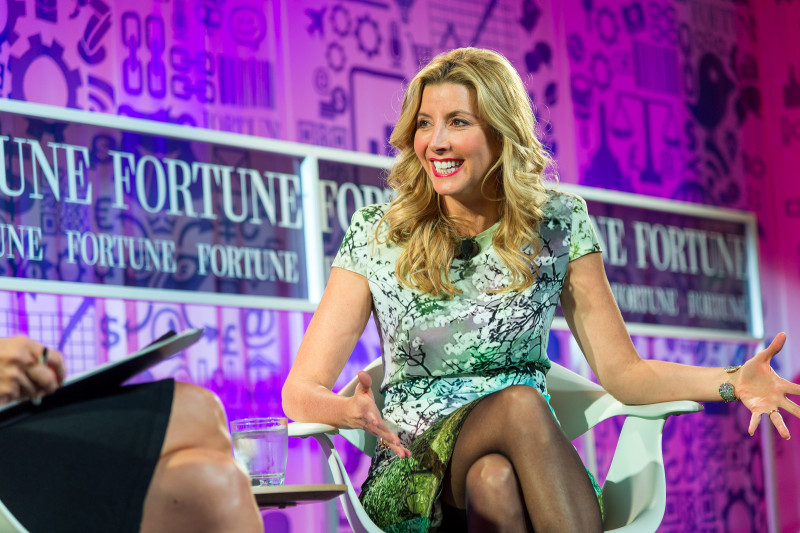 Impact:
Named the world’s youngest, self-made female billionaire by Forbes Magazine and one of TIME’s 100 Most Influential People, Sara Blakely is 100% owner of her revolutionary company, Spanx. At the age of 27, Sara invested her life savings of $5,000 to invent footless pantyhose which eventually resulted in an international brand. Today, Spanx receives $250 million in annual revenues and has net profit margins estimated at 20%. Through the Sara Blakely Foundation, Sara has donated more than $20 million to charities that empower women and girls.

I pledge to invest in women because I believe it offers one of the greatest returns on investment. I am committed to the belief that we would all be in a much better place if half the human race (women) were empowered to prosper, invent, be educated, start their own businesses, run for office — essentially be given the chance to soar!” – Sara Blakely

Bio: Sara Blakely had never taken a business class or had any experience in the pantyhose industry. She was a 27-year-old sales trainer, selling fax machines door to door with a simple idea: to maintain the slimming effect of pantyhose—without covering her feet. Sara’s idea for footless pantyhose was validated when she flipped on the TV and heard role model, Oprah Winfrey, announce she had been cutting the feet off her pantyhose for years. After researching pantyhose patents in the Georgia Tech Library, Sara wrote her own patent and trademarked the name Spanx online. She eventually found a mill owner with two daughters who convinced him the idea was ‘brilliant’ and he agreed to help Sara manufacture the product. With a prototype tucked into her lucky red backpack, Sara flew to Texas where she pitched Spanx to Nieman Marcus in the ladies room. A company that started in Sara’s one-bedroom Atlanta apartment, propelled to the Oprah Winfrey Show where Spanx was named Oprah’s favorite product of the year. A shapewear revolution was born!

Today, Spanx is headquartered in Atlanta, GA and opening retail shops across the United States and worldwide in more than 50 countries. Sara is the youngest self-made female billionaire, but refuses to stop there. After appearing with Sir Richard Branson on the reality show The Rebel Billionaire in 2004, Mr. Branson gave Sara $750,000 to start her own foundation. Through the Sara Blakely Foundation, she is empowering women globally and locally through education and entrepreneurship. The foundation has already donated more than $20 million to charities that empower women and girls.

More recently, Sara has become the first woman to sign the Giving Pledge, created by Warren Buffett and Bill and Melinda Gates. Sara has promised at least half of her wealth to charity explaining, “I pledge to invest in women because I believe it offers one of the greatest returns on investment. While many of the world’s natural resources are being depleted, one is waiting to be unleashed – women.”