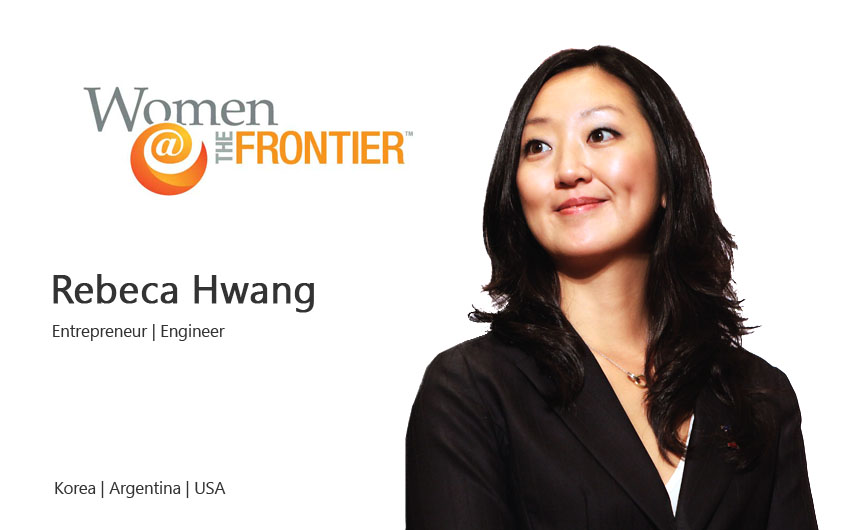 Impact: A serial entrepreneur, Rebeca Hwang co-founded YouNoodle, Rivet Ventures, Cleantech Open and Startup Malaysia. Today, she is Managing Partner at Rivet Ventures, an early stage venture fund whose products and services cater to a female demographic. Prior to Rivet Ventures, Rebeca was Co-Founder and CEO of YouNoodle, a San Francisco-based launch pad for startups and building platform for entrepreneurship competitions around the world.

Work hard for the future but never at the expense of the present.
– Rebeca Hwang

Rebeca Hwang is proving she’s an outlier in the world of tech startups. In an industry where women represent 3% of all tech founders, she is the Co-Founder of multiple ventures. Today, she is Managing Partner at Rivet Ventures and Co-founder of the San Francisco-based startup, YouNoodle, a technology platform that has powered entrepreneurship initiatives by the governments of Chile, Malaysia and Korea, as well as NASA and 7 out of the top 10 universities in the world. YouNoodle is also working with companies like Amazon, Microsoft and Intel to help them engage with entrepreneurs and strengthen communities.

Bio: Born in Korea and raised in Argentina, Rebeca attended undergraduate and graduate school at MIT, majoring in Chemical and Environmental Engineering. As an inventor, her work has garnered three US patents and seven patents with pending applications. Rebeca’s early projects, which focused on clean water initiatives, received many accolades, including the MIT Ideas Prize, the Lemelson award and recognition as a finalist in MIT 100K.

Following MIT, Rebeca pursued a Ph.D. on Social Network Theory at Stanford University. During this time, she co-founded the Cleantech Open (CTO), now the largest cleantech competition in the US. Then, in 2007, Rebeca took a leave of absence from her Ph.D. program to co-found YouNoodle.

Rebeca Hwang with W@F in Peru

In our last post, we talked with Jacqueline Jones Royster, the first African-American Dean of the Georgia Institute of Technology. During her interview, we learned how this pioneer and Role Model leverages her talents as a “writer, reader, and talker” to rise above the   of women in academia. A leader in her field, she holds the Ivan Allen Jr. Dean’s

Chair in Liberal Arts and Technology, and is professor of English in the School of Literature, Media, and Communication.

Rebeca was named one of Forbes 20 inspiring young female founders to follow on Twitter and in MIT Technology Review’s prestigious ’35 Innovators under 35.’ Recognized by the World Economic Forum, she also received the Young Global Leaders award.

Rebeca now serves as a Board Member of BASES and the Imagine H2O water start-up competition. Additionally, she is a member of the mentorship team that advises the top Israeli startups selected by the UpWest Labs incubation program in Silicon Valley and is the co-founder of TIM’s Garage, an accelerator for MIT startups in Silicon Valley. Rebeca is an international speaker and lecturer on “Technology Entrepreneurship” and the “Entrepreneurial Thoughts Leaders Program” at Stanford University.

Rebeca was named one of Forbes 20 inspiring young female founders to follow on Twitter and in MIT Technology Review’s prestigious ’35 Innovators under 35.’

If you want to learn more about this inspiring Global Connector, find her on Women@TheFrontier’s  Five Fierce Women We Follow on Twitter- Entrepreneur Edition or our Global Gatherings page.