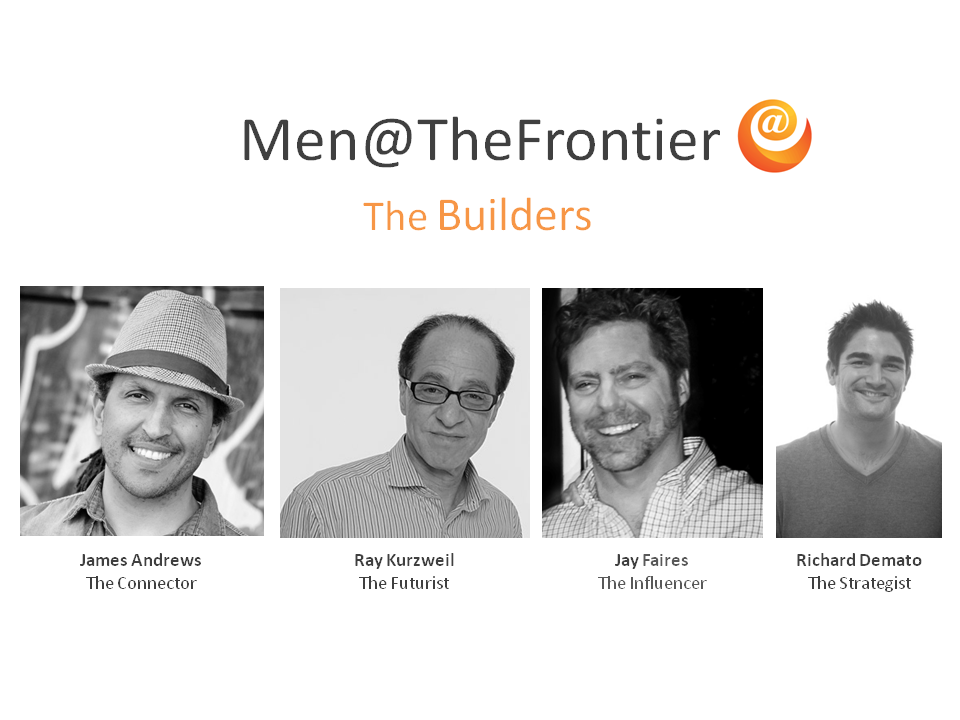 Who are the Men Building W@F?

“A woman is human. She is not better, wiser, stronger, more intelligent, more creative, or more responsible than a man. Likewise, she is never less. Equality is a given.” ― Vera Nazarian

Women’s organizations are typically about women.  I know it’s not a life-changing statement, but at W@F we’re pushing boundaries in a different direction.  We believe ‘equality’ means honoring and celebrating the collective stories of men and women around the globe. We also recognize that behind every successful woman (and woman-led organization)  is a mentor, friend, or advisor who’s a man.  And we couldn’t have launched W@F without our Men@TheFrontier, the builders, boosters, and branders who have supported us along the way.

While we usually highlight our Female Game-Changers, today we’re talking about the builders- the men who have volunteered resources, time, and experience to help create a solid foundation for W@F.  They have disrupted innovation and business in their own right, but didn’t stop there. Why? Like us, they believe girls and boys around the globe deserve an equal opportunity to achieve their dreams- no matter how high the ceiling may seem.

So, here are the four builders of W@F:

1. James Andrews:  The Connector
A man at the epicenter of social media, conversations, and culture

James is a founder, entrepreneur, and experienced digital strategist who has led companies into success by knowing what’s next in communications. As StudioGood’s Chief Digital Evangelist, James brings global agency and strategic startup experience. He’s the founder of Social People and his clients have included Nike, Equinox Fitness, GRAMMY Awards, Lexus, and Beats By Dre. He was previously VP of Ketchum Digital, directing global social media strategies for Monster.com, FedEx, and Wendy’s.  His 20 years in non-traditional marketing include leadership positions at Urban Box Office, Columbia Records, Ecko Unlimited, and Isobar/Carat.

James is also a globally sought-after speaker, a contributor to CNN, CNBC, and Fox, was named to the 2012 Ebony Power 100 list, and blogs for Fast Company and Huffington Post.

Today, James serves as a Board Member for Women@TheFontier and his advice has been invaluable for getting W@F to launch!

2. Ray Kurzweil: The Futurist
An innovator who’s been dubbed “the ultimate thinking machine” by Forbes

Ray Kurzweil is one of the world’s leading inventors, thinkers, and futurists, with a thirty-year track record of accurate predictions. Called “the restless genius” by The Wall Street Journal and “the ultimate thinking machine” by Forbes magazine, Kurzweil was selected as one of the top entrepreneurs by Inc. magazine, which described him as the “rightful heir to Thomas Edison.” PBS selected him as one of the “sixteen revolutionaries who made America.”

Kurzweil was the principal inventor of the first CCD flat-bed scanner, the first omni-font optical character recognition, the first print-to-speech reading machine for the blind, the first text-to-speech synthesizer, the first music synthesizer capable of recreating the grand piano and other orchestral instruments, and the first commercially marketed large-vocabulary speech recognition.

Among Kurzweil’s many honors, he is the recipient of the National Medal of Technology, was inducted into the National Inventors Hall of Fame, holds twenty honorary Doctorates, and honors from three U.S. presidents.

Ray has written five national best-selling books, including New York Times best sellers The Singularity Is Near (2005) and How To Create A Mind (2012). He is a Director of Engineering at Google heading up a team developing machine intelligence and natural language understanding.

As an outspoken advocate for women role models in innovation and science, Ray’s support, friendship, and wisdom make him an invaluable mentor to Women@TheFrontier’s Board of Advisors.

3. Jay Faires: The Influencer
An entrepreneur at the cutting-edge of entertainment

Jay Faires has spent two decades as an executive, investor, entrepreneur, producer, advisor, and board member in the entertainment industry. He was the President and founder of Mammoth Records – an independent record label, publishing and lifestyle marketing company, sold to the Walt Disney Company for a 65x return on initial capital. In 2004, Faires built his music publishing company, BNY Music, later acquired by Lionsgate.

Jay serves on the Board of Advisers for Women@TheFrontier and has been an irreplaceable champion to W@F for the past two years.

4. Richard Demato: The Strategist
A creative strategist, connector, and instigator redesigning the world

Rich is a co-founder of The Workshop, a consultancy and creative agency for bold leaders, businesses, and non-profits that challenge the status quo. Clients have included Tony Hsieh’s Downtown Project, AOL, LVMH, the National Innovation Summit for Arts + Culture, and the Dell Social Innovation Challenge. He is also a co-founder of Impactor, a workshop series that taps a global network of industry leaders to solve the biggest challenges facing communities and emerging social enterprises.

Previously, Rich was the Social Innovation Curator for GOOD magazine, and sparked their partnership with Al Gore’s Climate Reality Project. He was also the CEO of COMMON, helping social entrepreneurs and global brands create new, profitable business models and creative approaches to market, for the common good.

Rich began his career at the Endeavor Agency before rising to partner at Fuse Entertainment, where he managed the creators, producers and writers behind hit TV shows such as The Mentalist, Burn Notice, Prison Break and feature films such as Sherlock Holmes.

Rich is on the Board of Advisors for Women@TheFrontier where his enthusiasm, ideas, and advocacy fuel the organization!

Be Br@ve, Be Bold
Now that we’ve shared some of the Men@TheFrontier, we want to know who inspires you? Show up and share your knowledge with others through our comments section, Facebook page or Twitter.